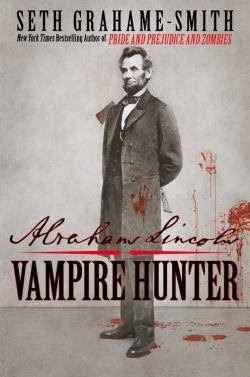 Anyone vaguely aware of literary happenings last spring probably noted the arrival of Pride and Prejudice and Zombies, the Jane Austin/Zombie Horror mashup written by Seth Grahame-Smith. Although the book itself was pretty unspectacular - the tone swung wildly between the
"Pride and Prejudice" and the "Zombies", and was more than a bit jarring - there was apparently a waiting market for odd genre mashups. Over the next year, a great many other novels with a similar theme were released, some by the same company, some not (and a couple missing the point entirely - the violent clash between the mundane and the fantastic is what sells the idea, and War of the Worlds with zombies just doesn't have that same resonance).

Despite this flood of imitators,when the announcement of an official prequel (the deliciously named Dawn of the Dreadfuls) arrived, Seth Grahame-Smith was not involved. Eventually, it became clear why. (Possible spoiler warnings to follow)

Although not quite the first to replace "Historical Fiction" with "Historical Figure", Abraham Lincoln: Vampire Hunter is a very respectable sophomore effort on Grahame-Smith's part. The overall tone is very much that of a respectable work of history, even while describing Honest Abe decapitating the undead with the same ease with which he split fence rails. This is partially achieved by presenting many of the action sequences as excerpts from Lincoln's journal. The interlacing of historic fact (for example, the heartbreaking number of Lincoln's loved ones who died throughout his life) with vampiric conspiracy is also skillfully done, in a technical sense at least.

Questions inevitably rise as to the appropriateness of using real people and events in this sort of work, and there are two specific cases here that must be dealt with. Lincoln's family life is mostly glossed over, though all due attention is given to Lincoln's grief when his loved ones die (the cause of these usually being implied to be murder by vampires instead of the various actual diseases that they fell prey to is remarkably non-exploitative).

The issue of slavery & the Civil War, however, is much more central to the storyline. Grahame-Smith casts Lincoln as being the key opponent of a group of vampires plotting to take over the United States, using the "peculiar institution" both as an easy source of nourishment and to pave the way for their eventual takeover. This has the effect of demonizing the main faces of the Confederacy, namely Jefferson Davis and John Wilkes Booth (the latter literally), as well as possibly misrepresenting Lincoln's own views on slavery. While it is still not quite clear how much of his writings on the subject came from personal belief and how much from political necessity, Grahame-Smith leans heavily towards the latter. At least he doesn't fall into the trap of equating the vampires with the south exclusively - one memorable scene has Lincoln accusing General McClellan of being one of the undead, and New York (of course*) seems to be a major center of activity for the creatures.

Still, I thought the whole subject was handled with as much tact as was possible, though this is of course a highly subjective analysis. On the whole, the book itself is quite worth reading - I even learned a couple things about the historical Lincoln I wasn't previously aware of (such as the Baltimore Plot) - though I really did not particularly care for the post-assassination epilogue, for a number of reasons (The mental image of Vampire Lincoln attending Martin Luther King Jr.'s "I have a dream" speech in his own memorial is not one of them, however). Probably the book is strongest in the beginning, when young Abe is the scourge of vampires all over the frontier.

Final Note: As seems to be the case with many popular books, there appears to be a film version of Abraham Lincoln: Vampire Hunter in the works. And who currently seems to be in charge of the project? Tim Burton. Really, could it have been anyone else?


*Warning: TvTropes link. Do not use if you have less than two free hours. Void where prohibited.
Posted by T. Everett at 9:25 PM No comments:

Well, it's been a while, hasn't it? For those just joining us, long ago, I let this blog (then called The Media Connoisseur) languish. There are, I suspect, many reasons for this - such as lack of time, distractions, and the inability to spell "connoisseur" the same way twice.

But I'm back now, and hopefully with a new name and a new look will come new motivation. While I'll still most likely be found discussing books and films, I may from time to time branch out to essentially anything I find interesting. So, then, I suppose it's time to get started . . .
Posted by T. Everett at 1:09 PM No comments: