At the end of my musings on the first few chapters of Nine Princes in Amber last week, I opined that much of the setting, or at least enough to get a handle on, would soon be explained. As we shall see, I was more or less correct.

As I suspected, Corwin's memory was soon to be returned, but not without a good bit of effort. After meeting up with one of his many brothers and discreetly dealing with the pursuers thereof, the two decide to make the journey to Amber. In a situation not unlike the Pevensies hearing the word "Aslan" for the first time, the word "Amber" conjures up in Corwin a host of associations - he doesn't know what it means, only that he belongs there. 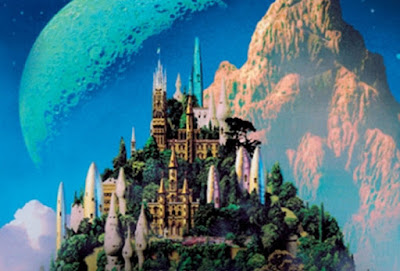 The journey itself is an interesting affair, consisting of what seems to be a number of jumps between alternate universes. Random, the brother, is controlling it somehow, and the travelers' effects change somewhat along with the surroundings (at one point Corwin pulls a bunch of paper currency labeled in Latin out of his wallet), although he isn't able to route them around all the obstacles, including a chase scene with another brother - this one a knight with a pack of especially ferocious hunting dogs.

Corwin takes all this in stride despite his lack of memory, which he eventually confesses to Random. Happily, a solution is offered - a powerful labyrinth called the Pattern that, when navigated by a member of their family, gives their various powers and should restore Corwin's memory. Of course his labyrinth is in Amber itself, but luckily there's a duplicate located at the bottom of a nearby ocean.

Of course it works and Corwin remembers not only his activities for the past several centuries, but the true nature of Amber - ". . . the greatest city that had ever existed or ever would exist. Amber had always been and would always be, and every other city everywhere, every other city that existed was but a reflection of a shadow of some phase of Amber." Heady stuff, and an interesting reversal of the usual assumption that our Earth is the "real" one. It's also, come to think of it, again not unlike the situation in Narnia, where the world the bulk of the stories take place in turns out to be a transient copy of somewhere more real.

Unfortunately for Corwin, however, now that he remembers what Amber is he also remembers that yet another brother - this one a particular rival - is poised to take control of it. Whether Corwin succeeds in stopping him, however, will have to wait for another week.
Posted by T. Everett at 10:52 AM No comments:

So a few years back I tried to boost the idea of December as "Science Fiction and Fantasy History Month". It didn't take off, for various reasons - not the least of which is my own sporadic blogging schedule - but I've always sort of wanted to return to it. With the changes that have happened in the literary SF&F fan-world over the past couple years, this may be the perfect time to reboot it, so for today and the next few Saturdays, I'll be talking about what I hope turns out to be a few different classics.

First off is Nine Princes in Amber, the first book in the "Chronicles of Amber" series by Roger Zelazny. I picked this one for a few reasons - I've seen it mentioned on a few lists of important and influential works (it is, for example, covered in Jeffro Johnson's seminal Appendix N series), I'm a big fan of Zelazny's A Night in the Lonesome October, and I suspect it's a big influence on one of my current favorite authors, John C. Wright. Perhaps most influentially, I recently came across a handsome two-volume omnibus collection of the series at my local library. This magnificent cover art by Boris Vallejo merely sealed the deal.

A few chapters in, I'm already thinking I made the right choice. It actually starts much like a contemporary thriller, with a first-person protagonist waking up with amnesia in what appears to be a private clinic. His escape from confinement and initial moves to discover his identity by tracking down the sister that had him confined there could come right out of a (70s-era) Bourne movie, with only a few hints - like his prodigious strength - that something weirder is going on. Even after he finds his sister's set of custom Tarot cards covered in pictures of what he recognizes as his family in archaic dress, it might just all be part of a weird but ultimately mundane conspiracy.

But of course, it's not - by next week, I suspect, both Corwin and I will have a somewhat clearer picture of what it actually is.
Posted by T. Everett at 11:36 AM 2 comments: