With a crew of drunken pilots, we're the only airship pirates!
We're full of hot air and we're starting to rise
We're the terror of the skies, but a danger to ourselves!

Over the last decade or so, untold amounts of digital ink have been spilt trying to define the term "Steampunk". Part of the problem is that steampunk is more of a stylistic genre than anything else, and as such can be applied to film, or literature, or prop-making, or music, or pretty much any other form of art. 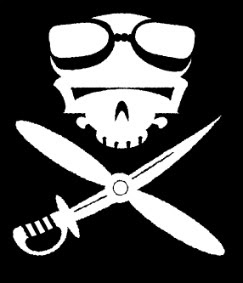 Now, while I've been interested in the genre since I first heard of its existence* that last category, steampunk-as-music-genre, didn't really appeal. Back in 2008, however, I came across a reference to a little ditty called "Airship Pirates", by a group called Abney Park. An intriguing title, to say the least. Once I had tracked down and listened to the song, well, I really liked what I heard:


Unfortunately,none of the other songs on their "Lost Horizons" album really grabbed me in quite the same way - not even the incongruously upbeat (not to mention plot-relevant) "Post-Apocalypse Punk". So, I bought a copy of "Airship Pirates" as a single, and went on my merry way.

A couple of years later, I heard a rumor that "The Wrath of Fate", a song from the band's new album, was something of a sequel to "Airship Pirates". Now, I'm a big fan of gratuitous continuity, so I decided to give it a shot.

Now, that's more like it. As I poked around, I discovered that the new album -  called The End Of Days - takes "gratuitous continuity" to a level possibly unheard of in the music industry.

It seems that, since Abney Park decided to brand itself as a "steampunk band", they've been using their songs to create a fictional background for themselves; a complex story involving time travel, accidental apocalypses ("plot-relevant", remember?), and of course Airship Piracy. In recent months, they've even branched out into a role-playing game and upcoming novel further exploring the setting.

But even without this lovingly crafted backstory, many of the songs from The End of Days (as well as their previous album, Æther Shanties) are quite enjoyable themselves. I would especially point out the aforementioned "The Wrath of Fate", "To the Apocalypse In Daddy's Sidecar", and "Neobedouin", from the former; and "Building Steam" and "The Clockyard" from the latter, as being well worth a listen.

With these last few albums, Abney Park has easily made itself one of the most unique-sounding bands I've ever heard. Even if they have written a philosophically questionable lyric or two (I'm still trying to work out whether the references to Christianity in "I've Been Wrong Before" are complimentary or not), I will be quite interested in whatever they end up doing next.

They're certainly better musicians than they are pirates, at least . . .

*The date of which, for the historically minded, I can only say (though with some certainly) was between 4 November 2004 and 23 February 2007.
Posted by T. Everett at 5:06 PM No comments:

. . . has come and gone from the theaters, and I've had some time to mull over my reaction to it. I'd been anticipating the movie for quite some time, and was frankly a little bit underwhelmed. Don't get me wrong, there's nothing I can point to as being bad about this movie - well, nothing major, anyway - but I have, nonetheless, an unsettling feeling that something was off. Maybe my expectations were just too high.

Anyway, despite my vague dis-satisfaction, this film still did - and did well - what it set out to do, namely take a typical Western and turn it on it's ear by introducing invading aliens. Now, I'm not very familiar with the Western as a genre - I've often said my favorite example of such is Back to the Future Part III - but prior to the first alien attack, it seemed that we were all set for a stereotypical - and probably literal - showdown between the anti-heroic drifter* and the corrupt cattle baron that rules the town with an iron fist. 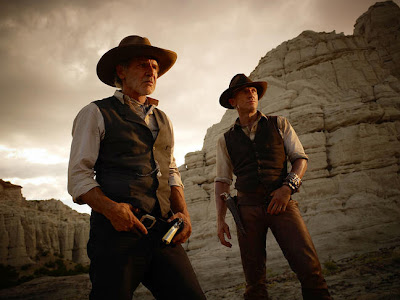 In their own ways, over the course of the film after the alien attack both Jake and Colonel Dolarhyde transcend the stereotypes they start out as. For Jake this is mostly a matter of slowly recovering his lost memory (though the closing scene indicates that he's given up outlawry), but Dolarhyde has a much more dynamic character arc.

He begins as a straight-up antagonist, first seen torturing one of his own employees over some incinerated cattle (for some reason, he doesn't believe the  hapless cowpoke's claim that the herd caught fire while he was falling in the river), then stomping into town to demand that the sheriff give him Jake (who did him some as-yet-unspecified injury) and Percy (his bratty son) instead of sending them to the Marshal, as the law requires.

As badly displayed as it is, this kernel of goodness - Dolarhyde's love for his son - is ultimately the catalyst for his redemption. In particular, Percy's capture by the aliens spurs him into leading the posse to track them down, thus forcing him to co-operate not only with a gang of outlaws that robbed him, but with the local Apaches. This is particularly eye-opening for Dolarhyde, as some of his employees are Apaches - and one in particular, Nat, seems to have great respect for Dolarhyde, and at one point brings up a tale of his deeds during the Civil War. Unfortunately, Dolarhyde does not appreciate this, gruffly telling him that the stories "weren't for you, they were for my son."

It is a big sign of Dolarhyde's development, then, that later on, as Nat lays dying, Dolarhyde tells him that "I always dreamed of having a son like you." Conveniently, when Percy is rescued from the aliens he's displaying the same amnesia that Jake had, which means that Dolarhyde has been given something of a second chance with him. It is, I suspect, not accidental that the name of their town is "Absolution".

In contrast to these weighty matters, a lot of the film, including the parts with the actual aliens, is actually quite light. In part, this comes from attempts to draw comparisons between the aliens and the cowboys - the worst example is probably the Space Lassos with which the townsfolk are abducted. Thankfully, almost nothing else is quite this campy**, and it's actually somewhat refreshing to have the alien's motivation be something as mundane as gold (of course, they may need it for industrial purposes and not, as Dolarhyde hilariously assumes, as currency).

The film did have a couple other mis-steps, such as the aliens' seemingly variable vulnerability to gunfire and/or bladed weapons. Another thing that bugged me was the upside-down ship in the middle of the desert - not that it wasn't a cool visual, but were we supposed to assume that the aliens somehow caused it? Because that would be completely at odds with what we later find out about the scale and capabilities of the alien's operations.

But these are minor vexations with what turned out to be a perfectly enjoyable film. I'm still not sure what exactly was lacking about it - it had, as I mentioned, deep character development, but there was quite a lot of decent and (so far as I could tell) period- and genre- appropriate action. And all this, without devolving into preachy comparisons of the invading aliens with the settlers. Perhaps it was, after all, just my expectations that were off - the film, for the most part, worked really well. If nothing else, they certainly nailed the Western "look" - when the west wasn't getting blown up, that is:

That image says everything else that needs to be said, really.


*I note with interest that, as an amnesiac, Daniel Craig's character begins the film quite literally as the man with no name. And when it is revealed, his last name is Lonergan. Ha!

**And it could have been much, much worse. Several years ago, the graphic novel this film was . . . let's say inspired by, was available to read online for free. Horses that flew because their shoes were made of alien metal were involved.
Posted by T. Everett at 10:42 AM 1 comment: