Where Someone Has Gone Before 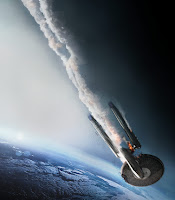 Look, I'm not one of the sorts of  Star Trek fans who felt betrayed or insulted by 2009's Star Trek taking the focus into a new timeline. Nor am I terribly convinced by arguments that boil down to "it has too much action to be a proper Star Trek story". And truthfully, I have very few problems with Star Trek Into Darkness as a whole - but the problems I do have a pretty central to the film.

They're also pretty spoilery, so if you haven't seen it yet you probably want to take care of that before venturing below the cut.