A few days ago, the news broke that Earl Scruggs had died. Now, as important a figure to Bluegrass music as he was, I can't say I was a huge fan - though what music of his I have listened to, I've enjoyed. 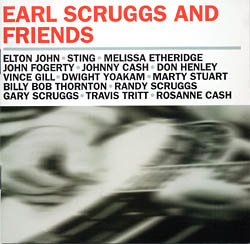 In fact, one of the first CDs I ever purchased was one of his, to be precise his 2001 album Earl Scruggs and Friends. Though it didn't inspire me to seek out more Scruggs specifically, I do think it helped shaped my taste for country music in general. One track notable in this regard is his cover of "Ring of Fire" with Billy Bob Thornton, which I actually prefer to Johnny Cash's version. Sorry, Johnny, but compared to Earl's your version sounds way too much like a Mariachi band.

But the most important, and certainly the most well-known, track from that album was a new version of "Foggy Mountain Breakdown". In my opinion Scruggs and company earned the Grammy this recording won them, and from the look of the video they had a blast laying it down:

Even though it's "just" the musicians in the studio, there's something about this video - like all good music videos - that makes it a joy to watch as well as listen to. Not just for the celebrity-spotting - yes, that's Steve Martin playing a banjo, and Wikipedia informs me that the gleeful maniac on the piano is Paul Shaffer - but the way each player gets some time as the primary focus, with said focus eventually returning to Scruggs himself is artfully done. And, as I said, the sheer joy evident in the various performances* is somewhat infectious - it's hard to keep from smiling while even listening to this piece.

And that, perhaps, is the best legacy any performer can have. Even though I have only a dim understanding of Earl Scruggs' legacy, I'm still grateful for the music he's left us with - and perhaps in the future I'll be inclined to listen to more of it.

*Well, except for the hirsute fellow on the keyboard - whenever the camera is on him he stays pretty Zen.
Posted by T. Everett at 12:24 PM No comments: Links to this post