This one turned out to be a hard entry for me to write, and it ended up a slightly inaccurate one.

Slightly inaccurate in that it's only the end of the book in question that is at all melancholy. That book, I suppose I should say, is The House At Pooh Corner, the second of the two A. A. Milne books that introduced the world to Winnie-the-Pooh, Christopher Robin, and the other denizens of the Hundred-Acre Wood.

Now, I've been a fan of the Bear of Very Little Brain pretty much since infancy; therefore, I was quite thrilled when my family acquired a nice hardbound copy of The Complete Tales of Winnie-the-Pooh many years ago. I read it many times in middle school and after, and not always to my intellectual betterment (I distinctly recall one instance in which I received a less-than-stellar grade on a spelling test, partially for submitting the word hunnysuckle).

Negative influences on my spelling skills aside, I like this book for quite a bit. While most of the book is quite funny (and occasionally in ways at odds with the way Disney handles the characters - Eeyore in particular makes quite a few cutting remarks at opportune moments). The last couple of chapters, however, have always made me a bit melancholy.

For the penultimate chapter, this was largely because of the callous way Owl and Eeyore force Piglet out of his home. The fact that they don't seem to have realized it almost makes it worse - even as a little kid I found that whole sequence very unfair.

But it's really the last chapter that makes The House At Pooh Corner worth mentioning in this category. It's really quite odd, since the last sentence would seem to be a hopeful one:

"But wherever they go, and whatever happens to them along the way, in that enchanted place on the top of the Forest, a little boy and his Bear will always be playing."

Despite this, the parts of the chapter immediately prior to this are all about how Christopher Robin's education is strange and confusing to Pooh, hearkening back to earlier chapters in which his schooling causes him to disappear completely from the Wood.

So on the one hand, you have the naturally bittersweet theme of growth, of leaving one stage and entering another. On the other, you have a deliberate subversion of this theme, with a hint that this subversion is not quite natural (note the reference to an enchanted place). I find the resulting clash somewhat distressing, and usually left me feeling sad when I finished the book.

Not that that ever stopped me from re-reading it, though.
Posted by T. Everett at 12:56 PM No comments: Links to this post

So, yeah, at this point it's pretty obvious I'm not going to be doing all 30 of these in June. Sorry about that.

Observant and regular readers will have probably noticed by this point that one of the things I look for in my fiction is coherent (or at least interesting) world-building. The acknowledged grandmaster of this, of course, is J.R.R. Tolkien; he even coined some of the terminology associated with this, such as "Secondary World" and "sub-creation".

Some authors and other scholars take this one step farther - treating their favorite stories as the lightly-fictionalized records of real events, analyzing broad swathes of literature to uncover the "true" events behind them, and connecting them. This game has been played with popular literature for quite some time, and has interested me ever since I first heard of it. Indeed, I've even dabbled in The Game myself, and was actually intending to make this post about Crossovers.

Then, I finally manged to get ahold of a copy of Myths for the Modern Age, a collection of essays exploring this kind of "Tertiary World"-building, edited by the same Win Scott Eckert as is behind Crossovers. As a compilation, naturally there are some pieces that are more interesting than others - for example, one of the early pieces, "Wold-Newtonry: Theory and Methodology for the Literary Archeology of the Wold Newton Universe"is a particular favorite of mine; not least because of the delightful phrase, "literary archeology".

But that's not the article that convinced me to use the book for this post - that honor falls to Eckert's own "Who's Going to Take Over the World When I'm Gone?", a genealogical* study of the Moriarty family. Imagine my delight and surprise when, seemingly out of the blue, the article mentions how one of the Professor's grandchildren is none other than Howling Mad Murdock of The A-Team (the television version, obviously). Since Murdock is pretty much my favorite A-Team member, and The A-Team itself one of my favorite television shows, I was quite pleased at this.

Amongst other amusing tidbits from that section was the idea that Murdock's first name is "Hamish" - in the show, Murdock is never given a first name, only an initial. And why is this so amusing? Because the name "Hamish" is a variant form of "James", which according to Sir Arthur Conan Doyle was the first name of both Professor Moriarty and at least one of his brothers (the cavalier attitude some famous authors take towards continuity is part of what makes this kind of fandom so entertaining).

As if Murdock wasn't enough, both Eckert's article and a later one by Brad Mengel ("Watching the Detectives, Or, The Sherlock Holmes Family Tree") both theorize that Hannibal Smith was the son of Fu Manchu's great nemesis, Sir Denis Nayland Smith. Furthermore, it seems that Hannibal's grandfather was Fu Manchu himself (through his mother Fah lo Suee) - this Asian ancestry no doubt explains how Hannibal kept getting away with his "Mr. Lee the Chinese Laundry Man" persona. 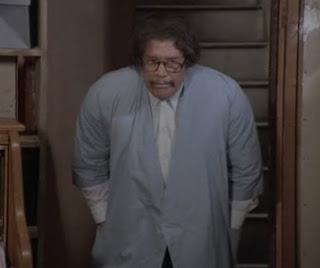 This is a much better disguise in real life.
While the inclusion of half the A-Team is what qualified Myths for the Modern Age as a Book That Makes Me Happy, there's plenty of other good material to be found within. Admittedly, much of it is available on Eckert's Wold Newton Universe website, though I understand the published versions are more up-to-date. Indeed, a quick poke around the site shows that it includes only Hannibal's inclusion, not Murdock's. This is no criticism, merely an acknowledgement that the two sources are different - and it will surely inspire me to acquire my own copy of Myths, from a source other than the library.
*Genealogical studies linking various fictional characters being one of the major features of Wold Newton Universe scholarship.
Posted by T. Everett at 9:39 AM No comments: Links to this post