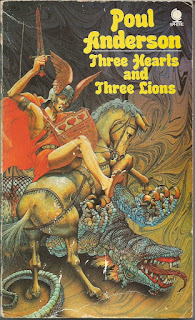 Recently I've been reading Three Hearts and Three Lions by Poul Anderson, which is about a man fighting in World War II who discovers he has another life as a famous knight in a world that resembles the chivalric romances of King Arthur and similar tales.

It's an enjoyable read, and a fascinating work for any number of reasons - the both implicit and explicit Christianity, the clear antecedents for some elements of fantasy role-playing games (I believe Jeffro addressed this in Appendix N), the way the main character uses his modern knowledge to survive some of the more fantastic elements - although this last, I thought, was somewhat overused and undercut my belief in the setting, to an extent. The rationalization of the giant's cursed gold as being irradiated by the process of turning to stone was an especially bad example.

But the one element that really made me take notice was in Chapter 15, when the knight and his companions visit a wizard to see about getting the knight back to his home world. Said wizard has a sign on his house that reads:

It's not, I think, intended to be entirely serious, and indeed the wizard in question admits that some of the services are for advertising only. However, it brought to mind another advertisement by a wizard some half a century later:

Now, I've checked the Word of Jim website and have seen no definitive proof of this, but I cannot believe that Harry's ad isn't a response to Martinus'. Not just the format, but especially that last line seems to set up a deliberate dichotomy between the two.

Whether this specific influence is intended, unconscious, or imagined, I would say that both The Dresden Files and Three Hearts and Three Lions are worth reading. Indeed, as a standalone work the latter is in some ways, despite being originally published in 1953, more accessible.
Posted by T. Everett at 3:18 PM 2 comments: Links to this post