A few months back I talked about a podcast called Geek Gab, mentioning that I wasn't a regular listener, but was interested because they were interviewing Jeffro Johnson about his "Appendix N" book. Since then, however, I've been tuning in more often than not, even as they've grown from a single weekly show to a veritable online network.

In one recent episode of the spinoff show Geek Gab Game Night, the guest, game designer Jim Desborough, was talking about his adaption to tabletop gaming of the Gor novels by John Norman. Now, I'm only familiar with this series through it's rather dubious reputation, but the podcast covered most of the non-dubious basics - Gor is a planet in Earth's orbit (only on the opposite side of the sun so it can't be detected from Earth), which has been seeded by inscrutable aliens with small populations of various Earth cultures spirited away and kept from progressing to far down certain areas of technological development, notably firearms. 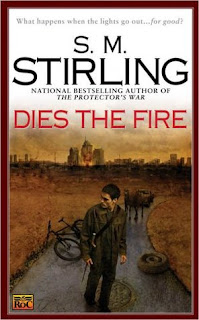 In the course of the discussion, a brief mention was made of S. M. Stirling's time-traveling Nantucket trilogy that began with Island in the Sea of Time, which got me thinking about the spin-off series that Stirling started with Dies the Fire. That book begins with a catastrophe similar to a worldwide EMP pulse that also depowers gunpowder, somehow. As the books go on, there's a recurring theme - calling it a subplot would be giving it too much credit - of people studying what they call the Change and concluding that, scientifically, it makes absolutely no sense. Eventually it is revealed that, like on Gor, humanity is being artificially kept in its Medieval Stasis by inscrutable aliens*, albeit ones considerably less flashy than the ones on Gor.

Even more intriguingly, the setting has gone through a number of time-skips and is now a couple of generations from the Change. One of the more interesting aspects, as the character's horizons expand, is that they keep meeting different groups of people who've survived psychologically by taking a shared element - say, the RCMP or the Boy Scouts - and making it the foundation of a new culture. This tends to give the map, at least in North America, a sort of anachronistic crazy-quilt feel, much like the descriptions of Gor with its chronologically diverse groups of alien-abducted Earth people.

So was Stirling intentionally riffing on these elements of the Gor setting? I don't know of any concrete evidence one way or another, but I do suspect it to be an unconscious influence. Of course, it could also be a coincidence** that the main villain of the first few books is named Norman, and has a bit of the, shall we say, Gorean philosopher about him . . .

*Actually an inscrutable far-future human gestalt super-mind, or something.

**More certainly a coincidence, and certainly more of a stretch, is the appearance of an ersatz Tarzan in one of the stories in the universe-opening short story collection Stirling edited a few years back. Tarzan, of course, was an invention of Edgar Rice Burroughs along with John Carter, whose Barsoomian adventures the first few Gor books are said to be a New Wave-ish pastiche of.
Posted by T. Everett at 8:30 AM No comments: