Warriors of the Space Crusade

Picture, if you will, a crusading knight. Struck by a sudden war-weariness, he abandons the fight against the infidel and wanders into the desert, finding himself in an enemy-controlled city. There he wrestles with his newfound pacifistic desire while at the same time freeing and converting enough of the enslaved populace to kick off a full-blown revolt. 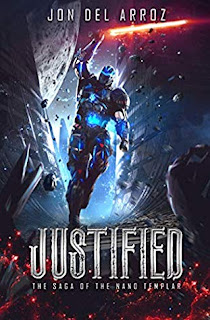 A mid-20th-century Technicolor epic? A serial novel from some long-lost historical pulp magazine? In fact, this is the general plot of Justified: The Saga of the Nano Templar, the latest novel from the most electrifying Hispanic in science fiction, Jon Del Arroz. Mixing the rather obvious historical allegory with familiar Mil-SF tropes like power armor and space navies, what comes out is a satisfying tale of equal parts derring-do and Christian philosophizing.

Yes, Christian, for despite the book seeming to take place in a galaxy far, far away with no humans whatsoever in it (although as far as I could tell Templar Drin's enemies, the Sekarans, receive no physical description that differentiates them from humans), the religion of the Elorians is basically Christianity. There are, naturally, some altered details - it's oddly Narnian in that respect - but close enough that the tension between "loving your enemy" and "protecting the innocent" echoes all too strongly with the sympathetic reader.

That tension being the main internal conflict for our Nano Templar means that he remains a very static character throughout. This provides an interesting contrast with the book's other viewpoint character, Anais, who goes from leporine party brat to defiant harem slave to revolutionary guerrilla. The nascent romance between her and Drin was, I thought, one of the book's few weak points, as it bounced hard against the Templar's vows of chastity and generally got lost in the more general swirl of Drin's search for meaning and divine goodwill. As for whether he finds it, well, I think the title of the book is a big clue here.

I received a free copy of this book from the publisher in exchange for this honest review.
Posted by T. Everett at 11:49 PM No comments: