OK, so originally I intended to spread these out throughout the month, but you all know as well as I how busy it gets this time of year - maybe in 2011 Science Fiction & Fantasy History Month should be in August.

As I tried to subtly indicate, the first book I decided to read for the month was Dune, by Frank Herbert. Although it's a pretty famous piece of literature, I started out knowing very little about it - basically, that it took place on a Desert Planet inhabited by giant worms.

As I read the book, it was easy to see how it has influenced later fiction, from Star Wars and Tremors to Order of the Stick. In itself I found it a pretty enjoyable read, although "Far-future Pseudo-Medieval Space Opera" isn't exactly my most favorite genre. Actually, I found that what I would have called the "Science-Fiction" elements of the novel were overshadowed by the "Fantasy" aspects. The young noble, betrayed by a decadent aristocracy, escapes to a vast wilderness and wins the trust and leadership of the barbarian inhabitants by taming the local mega-fauna. If Paul Atreides hadn't arrived on Arrakis via spaceship it would basically be a weird hybrid of Tolkien, Howard, and Burroughs*.

Part of this, I think, is that over the years genre divisions have become much more rigid and plentiful. My "Far-future Pseudo-Medieval Space Opera" label was mostly in jest, but like most good satire (if you'll excuse my presumptuousness), there's an element of truth to it - just look at what TvTropes calls the PunkPunk phenomenon.
On the other hand, back when some of the earliest writers in the genre were working, both fantasy and science fiction fell under the more general term, "Speculative Fiction"**. Writers of what we now call "Horror" fit in there, too - some of H. P. Lovecraft's stories are all three, simultaneously. For that matter, though today they're considered the fathers of Science Fiction, H.G.Wells and Jules Verne's works can also bee seen as more like the techno-thriller writers of today, people like Clive Cussler and Michael Crichton.

Amusingly enough, my copy of Dune has a blurb on the back cover, wherein Arthur C. Clarke - yes, he of the famous law about magic and highly advanced technology - says of the novel that "I know nothing comparable to it except The Lord of the Rings". High praise indeed, and surprisingly, I kind of agree with him. I think the key similarity is that both Tolkien and Herbert developed highly intricate and well-thought-out backgrounds for their novels, which they then drew on to create a detailed, very realistic world in which to place their stories.

In the end, it was easy for me to see why Dune has the cultural place that it has. I certainly enjoyed reading it, though not enough to make me actively seek out the sequels (which I understand are kind of on the weird side). Someday I'll give it a second read-through, too, and see what kind of a difference that makes.

Probably not this year though.

*Actually, that's not a bad description of the book as it is.

**There are also some interesting variances in terminology to be found from back then - one of my favorites was scientifiction, which I suspect fell out of favor because of its unpronounceablity the first time through.
Posted by T. Everett at 6:00 PM No comments:

So, this evening I was out with the family at the movies, seeing the latest installment of an ongoing fantasy franchise. No, not that one, we saw The Chronicles of Narnia: The Voyage of the Dawn Treader. As Voyage has always been one of my favorites among C. S. Lewis' Narnian tales, I was rather worried about how it would turn out. The various trailers leading up to the film's release didn't really help my growing sense of unease.

As it happens, my fears were completely justified. The various episodes that make up the tale of the Dawn Treader were for the film, variously abbreviated, combined, shuffled, and forced into an overarching metaplot with no basis in the original book whatsoever. As an adaptation, it was probably one of the worst I've ever seen, second only to Eragon.

And yet, it's only in the adaptation of the story sequence that I can find any faults in the film. Visually, it's gorgeous, as most movies are these days, with special mention going to the Dawn Treader herself, as well as the Sea Serpent in all its giant-cobra-meets-Venus-flytrap glory. None of the characters were mishandled, as far as I could tell - Eustace's introduction and growth from whiny baggage to protagonist, in particular, was handled quite well, even including his particular friendship with Reepicheep. Aslan, much to my delight, even kept his lines from the end of the film spelling out that He's in our world, too.

There were a surprisingly small number of things that were actually missing from the film, given how violently everything else was rearranged, and most of them I can grudgingly concede as being lost for time constraints (although you'd think that when one meets Ramandu's Daughter on Ramandu's Island, Ramandu himself would at least show up). Even the aforementioned metaplot, as shoehorned in and unnecessary as it was, at least wasn't completely out of left field - maybe I grasp at straws trying to make it better, but the "seven swords on Aslan's table protecting Narnia" thing, to my mind, has a faint echo of the tree Diggory planted at Narnia's genesis in The Magician's Nephew.

Clearly, I have some rather conflicted feelings about the film. Maybe I'm too easily pleased by a decent spectacle, but I'm having a hard time building up any rage against the film-makers for the changes they made to the story. One thing I'm not conflicted about is that when they get around to doing my other favorite Chronicle, The Silver Chair - and there were certainly enough hooks in the ending to assure me that they're planning just that - I'll be ready and willing to set sail for Narnia again. 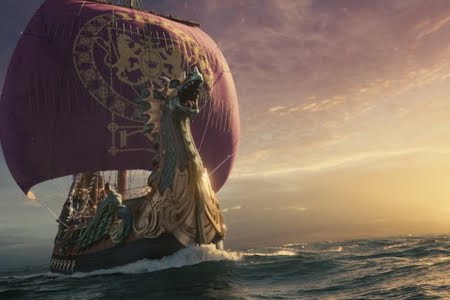 Email ThisBlogThis!Share to TwitterShare to FacebookShare to Pinterest
Labels: Chronicles of Narnia, film

"My dear friends, I am calling on you to help me start a movement. This December, let us take another step in further promoting one of our great loves---Science Fiction and Fantasy. Let us declare December to be SCIENCE FICTION AND FANTASY HISTORY MONTH.

What? Why does it have to be promoted? you ask. Aren't we inundated with it? Isn't there more genre in film and on television than ever? Isn't the fiction market dominated by genre?

Perhaps, but as lovers of the genre, we owe it to ourselves to promote quality work and to invite the young into our fold ,giving them a perspective and understanding of the traditions and tropes of our literary world. Consider the political and cultural influence of science fiction and fantasy, and how it has helped us vent our angst, voice our identity, and celebrate our optimism."

(from The House of Sternberg, via The Blog That Time Forgot )

Apparently inspired by the "Twilight invented werewolves" uproar* some time ago, author and blogger Stewart Sternberg has started a movement "to promote the work of the past which we feels best represents that which made science fiction and fantasy such an important part of our culture and identity." Well, being somewhat interested in those topics, how could I stay away?

Therefore, I spent a little time digging through my entirely-too-huge "books to read" pile, and came up with three titles I think qualify as culturally significant: Frank Herbert's Dune; Isaac Asimov's I, Robot, and Jules Verne's The Hunt for the Meteor. I have never read any of these before (though I did see the Will Smith movie of the same title, and am familiar with some of Verne's more popular works), and will be putting down my thoughts on each one as I get through them, hopefully by the end of the month. I'm open to suggestions as to which to do first, though I'm leaning towards one candidate in particular. Either way, it should be fun.

*Short version: a historically ignorant Twilight fan accused Universal Pictures of, firstly, plagiarizing from Stephanie Meyer by putting werewolves in The Wolf Man, and, secondly, disrespectfully making the werewolf the villain. The Internet's reaction was somewhat indignant.
Posted by T. Everett at 12:34 AM 1 comment: