The Secret of the Doctor's Grand-Daughter: An Exercise in Creative Mythography

About a year ago, I came across some references to a comic book hero called Atomic Robo. Although mostly appearing in print, several adventures are available for viewing online. One in particular, as soon as I began reading it, signaled to me that this was a story, and a character, I was really going to like. 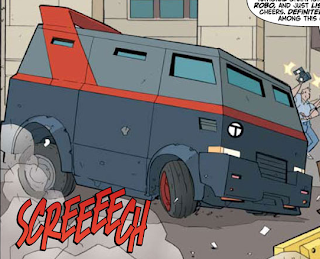 No, they don't ever explain why Atomic Robo is driving B.A. Baracus' van, though I have a faint hope that the upcoming titled-but-unscheduled "Atomic Robo and the Soliders of Fortune" arc will address this. 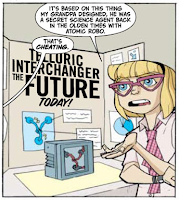 Far more interesting than the origin of Robo's van, however, is the character of Emma Armstrong, and the science project she creates that serves as the story's Macguffin. It is, of course, instantly recognizable to fans of a certain movie trilogy, but just in case you need a reminder, here it is in its original context: 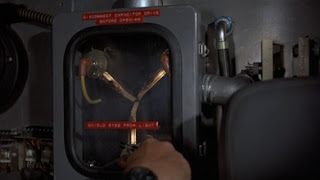 "This is what makes time travel possible: the Flux Capacitor!"


Of course what Emmett L. "Doc" Brown calls a "Flux Capacitor" young Emma calls a "Telluric Interchanger", but curiously enough, that phrase translates out to mean "Earth Switcher" - a decent description of what a time machine is if you're not careful with it. As the comic goes on, there are several more events that reinforce the idea of time travel - first, the appearance of Robo's supposedly time-displaced enemy Dr. Dinosaur, who tries to steal the Interchanger for reasons that probably only make sense to him. There's also a brief discussion of the British time-travel programme Dr. Who (Quoth Dr. D: "I do not even know who Tom Baker is!"), and the very end of the comic features the comic's first (and so far as I know, only) timeskip past the present day, into the future.

Based on all this, I think it's a safe enough conclusion that the Telluric Interchanger is, in fact, a reverse-engineered Flux Capacitor. This, in turn, leads to an admittedly radical conclusion: Emma's mysterious Grandpa is, in fact, Doc Brown of the Back to the Future series.

With this in mind, many little details, such as Emma's statement that the Interchanger is "based on this thing my grandpa designed"  begin to take on a new significance. A moment later she mentions that "the whole last page of Grandpa's notes were missing", and refers to "Grandpa's designs" for the Interchanger - even Emma's name, as close as it is to "Emmett", one can easily see as having been applied in honor of her grandfather.

Of course, there is one slight problem with this theory, and that is the fact that Robo remembers Grandpa, and not by a name that's  "Emmett L. Brown", either. Fortunately for the theory, Dr. Brown has been known to operate while using aliases, most explicitly when he visited 1931 under the name of "Carl Sagan". This incident is unrelated to the argument or to Back to the Future, but necessary to refer to whenever Carl Sagan and Atomic Robo are mentioned in the same context.
Furthermore, there are good reasons for Doc to have picked this particular combination of names for an alias - "Victor" alludes to his recently-revealed appreciation for the 1931 Frankenstein film, while "Armstrong" could be seen as a reference to Doc's distant familial connection with the Space Program.

On the other hand, it may very well be that Doc worked with Robo under his own name, and the "Victor Armstrong" alias was applied in retrospect - note that Robo does appear to be somewhat familiar with the concept of the Interchanger, and if their collaboration was before 1985 he wouldn't necessarily be aware that Doc had completed it. It may be relevant that prior to Doc using the Sagan alias, he spent a great deal of time - over nine months, in fact - using his own name while without a time machine in 1885.

In either case, it's quite likely that Emma's last name is not actually Armstrong, but Brown. Depending on which of the above theories is correct, it's possible that Armstrong is her middle name - after all, both Jules and Verne Brown have middle names inspired by famous scientists, and it's virtually certain that one or the other is Emma's father. I tend to lean towards it being Jules, given that Emma describes him helping her with her thesis.

Admittedly, she looks more like Verne, but that could very well be an inheritance from Doc, whom Verne more closely resembles physically as well. There's also the fact that Emma, being (roughly) ten years old in 2011, was probably born in 2001. Although the evidence for Jules' and Verne's biological ages is somewhat sketchy, barring long-term temporal relocation they would seem to have been about 20-21 and 18 (respectively) in that year, which also points to Emma being Jules' daughter.

If we accept this conclusion, then, another interesting question arises - when she started reverse-engineering it,  did Emma know what the Interchanger was supposed to do? Did she, in fact, know about her family's chrononautical origins? There's no indication one way or the other from the evidence we have - perhaps someday the chroniclers of Atomic Robo's adventures will shed more light on the subject.
Posted by T. Everett at 12:46 AM

Email ThisBlogThis!Share to TwitterShare to FacebookShare to Pinterest
Labels: A-Team, Atomic Robo, Back to the Future, Crossover, Literary Archeology