I bet you thought I had forgotten about these, didn't you? 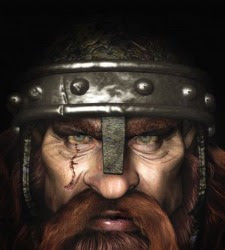 When I first encounter Marcus Heitz's fantasy novel The Dwarves, I was both somewhat surprised and rather excited. Now, as much as I like Tolkien, I've never been as fond of those works that took their major inspiration from him. Though there are no doubt many reasons for this, the relative sidelining of Dwarves in Tolkien's works (aside from The Hobbit) has always annoyed me, and so far as I am aware this has been more or less the standard ever since.

Therefore, when I first heard that there was a Dwarf-centric fantasy story floating around*, I was quite excited, and eager to get my hands on a copy. One might say that I pre-rated the book quite highly - however, this proved to be a mistake, as once I actually read it, I discovered that The Dwarves wasn't quite was I was expecting.

Now, there were quite a few interesting bits in the book, especially surrounding the Dwarvish culture described therein. The problem, at least to my mind, is that the author chose to make Tungdil, the hero of his story, an orphaned Dwarf raised among humans with no knowledge of his own culture.

I can see the appeal from a storytelling perspective, with the audience witnessing Dwarven political maneuvering, say, or finding out that each of the dwarven clans have an associated specialty among the traditional dwarven arts** at the same time the viewpoint character does. Furthermore, just typing out the last sentence of that last paragraph made me realize how much Tungdil's back-story resembles Worf's, although it goes a somewhat different direction.

Not a Dwarf, despite indications to the contrary.
Despite these perfectly understandable reasons, I was expecting  - perhaps hoping for - something with a bit more of an "insider" view. As it stands, the book was much less unlike most post-Tolkien high fantasy than I expected, hence my initial over-rating. In retrospect, I liked quite a bit about it, especially the Dwarf-centric parts that met my expectations - but, for every steampunk pneumatic intra-continental subway system, there seemed to be an irritating non-Dwarf sidekick (such as the Human actor Rodario, who for some inscrutable reason reminded me strongly of Gilderoy Lockhart, albeit more heroic).

Still, even all this hasn't managed to completely sour me on the series - and there are three more to read. I'm sure I'll get to them someday - just not as quickly as I might've otherwise.


*Admittedly, there may be others I haven't heard of - but then, I've never heard of them, have I?
**These consist of anything that involves making things out of rocks.
Posted by T. Everett at 12:02 PM 1 comment: