So What Is This #PulpRevolution, Anyway?

By now, regular readers of this blog will have noticed several posts using the #pulprevolution tag, and might be wondering what I mean by that descriptor. Happily, author J. D. Cowen has just made an excellent blog post that recaps the last several years of rediscovery of what pulp fiction really means.

"Of course, pulp fiction has never fully gone away. But that isn't without lack of trying. It has been used as little more than an insult or a cheesy aesthetic for those who hated them. It has been used as an insult by those who never bothered to read the original works. Pulp became a synonym for trash, and nothing else. The Tarantino movie didn't help. The tradition of genre fiction actually goes back through the pulps and the penny dreadfuls all the way to at least Poe. By ignoring the pulps you are cutting the line of tradition and thumbing your nose at it. Those who trash it have no idea what they are actually doing."

The post compiles a lot of the discussions, videos, and controversies of this movement to date (including one of the most objective takes on the whole Sad/Rabid Puppies Hugo Awards thing I've ever seen), making it a valuable resource for those interested in improving their writing craft.

And though it's only been a few years in the making, there's already been progress made. Jeffro Johnson recently had cause to give a quick sketch of some of the standout authors in the movement, a few of which have been mentioned here before.


If we can take it for granted that the past forty years has been a veritable Dark Age for science fiction and fantasy, then having P. Alexander’s Cirsova magazine has been an absolute godsend. Has it come close to the very best of the Weird Tales era? No one that I know of has argued that. But I believe he can go toe to toe with some of the better works in Andrew J. Offutt’s Swords Against Darkness series. More recently he has managed to go further and acquire stories that are on par with the better efforts you could find in Planet Stories.
You’d rather have the next H. P. Lovecraft? Well maybe he hasn’t arrive yet. But Misha Burnett‘s New Wave style handling of the Great Old One’s oeuvre  sure did manage to raise the bar on what I expect today’s short fiction authors.
Who has managed to capture some of the more thrilling qualities of Jack Vance and Robert E. Howard? Schuyler Hernstrom, hands down. Who has succeeded in imbuing his stories with the more compelling aspects of Lord Dunsany, C. S. Lewis, and 1930s space opera? John C. Wright. Who has diligently applied himself to reclaiming pulp era heroism and romance? Jon Mollison. Who has gone from making a work comparable to a short Andre Norton novel to recapitulating the fire of an early 1940’s Leigh Brackett? Dominka Lein! 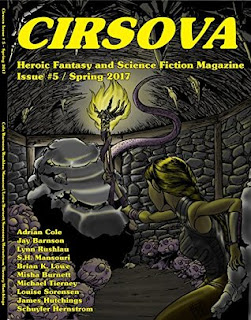 While I haven't read everything by every author on that list, Cirsova magazine, John C. Wright, and Jon Mollison have all made appearances, to much-deserved praise. And Jeffro modestly neglects to mention his own Appendix N, which as J. D. Cowen noted above deserves a great deal of credit as a catalyst for the movement. But you don't have to take our word for it - lots of these author have free works available on their websites (many of which are in my blogroll) or for their newsletter subscribers. And speaking of Cirsova, this week the fifth issue is free on Amazon Kindle - it's a great example of some of the ideas being thrown around in the Pulp Revolution (especially considering it has a story by Schuyler Hernstrom taking place in Misha Burnett's Eldritch Earth setting, and it's one of the highlights of the issue, too!).

Possibly the most astounding thing about the Pulp Revolution is the way it's expanded over only a few short years. If you're a fan of science fiction and fantasy and have felt that recent mainstream offerings lacked something, now's the time to dig in and try something new - the only place to go from here is up!

Email ThisBlogThis!Share to TwitterShare to FacebookShare to Pinterest
Labels: #pulprevolution, Cirsova, From The Internet, History

I used to be able to find good advice from your
blog posts.