Way, way back during the previous incarnation of this blog, I posted a bit about the then-current Pirates of the Caribbean film, Dead Man's Chest. Going back and re-reading my excited ramblings is a bit humbling now - possibly my views on that film have since been a bit soured by the failures of At World's End, but in retrospect I seem a bit . . . uncritical (also less skilled with formatting).

Still, having seen the latest installment in the franchise - Pirates of the Caribbean: On Stranger Tides - I can safely say that it was at least as good as DMC, and probably a bit better.

Email ThisBlogThis!Share to TwitterShare to FacebookShare to Pinterest
Labels: film, History, Pirates, Pirates of the Caribbean

What was I just saying about the 2011 blockbuster season?

So, two weekends past saw the release of Thor, the latest Marvel superhero film. Despite knowing basically nothing about comic-book Thor, I am at least superficially familiar with Norse mythology, so I hoped I wouldn't be completely lost. Before I get into the more specific yet hopefully spoiler-light commentary on the film itself, however, I do need to note that this was the first feature film I have seen utilizing the latest generation of 3D technology.

Now, it may be that the theater itself was at fault, but I thought that for a supposedly cutting-edge visual technology, the film was awfully blurry, especially during the early fight scenes. I've heard that other places have had a similar problem, so whether it was a flaw in the filming process, some or all of the prints, or the projection I'm not sure. I do think think that if it worked properly it would have been fairly impressive - but it didn't.

The movie itself, however, I thought was really good. I personally didn't like it quite as much as either Iron Man film - but then, I generally prefer Batman to Superman, too.

As I mentioned, my prior knowledge of Marvel's take on Norse mythology quite scanty (I think limited to the fact that Thor's secret identity was a scrawny doctor named Donald Blake, a reference I did catch when it popped up in the film), but the film was still perfectly easy to follow. I was especially pleased at a few mythological tidbits that made it in, such as a brief appearance by Sleipnir (I hear Hugin and Munin made it in, too, but I didn't catch them), as well as a certain plot-relevant revelation about Loki that I had completely forgotten about.

The conceit that the Norse pantheon is based on interactions with advanced humanoid aliens, while hardly original, was well-presented - especially the notion of Yggdrasil as a kind of wormhole network, which was quite impressively pictured during the ending credits. Some of its briefly-mentioned yet unseen planet-branches make for intriguing sequel possibilities - this long-standing Tolkien fan would really, really like to see Thor visit Alfheim, for example.

Plot-wise, the film didn't make any major mis-steps, although I do think that Thor's character growth should have taken somewhat longer, in-story, than it did. The ending I think played a bit with audience expectations - we know Thor is going to be in The Avengers, so his situation in this film's closing was somewhat surprising. It will be interesting to see how this gets resolved without either overtaking the entire film or trivializing the end of Thor.

The post-credits stinger was also interesting, though I suspect it would have worked a lot better if Thor had been released after Captain America. While I suppose part of the point of the stingers has so far been to lead into the next film; given that Cap's movie is going to be largely a period piece, it still seemed kind of a weird thing to preview.

Speaking of stingers, I was quite impressed with the way the one from Iron Man II was integrated into the plot of Thor, even as they reinterpreted it - the activity buzzing around the crater that we (or at least I) assumed to be SHIELD agents turned out to be a bunch on New Mexican rednecks having a party. And for the record, Stan Lee's cameo as one of said rednecks may be one of his funniest yet.

Of the, hmm, controversial casting of Idris Elba, I'll say no more than that I found his performance entirely appropriate to his character, and that Al Harron of The Blog That Time Forgot has two excellent pieces on the whole affair. Oh, and his sword was created by the previously blogged sword-smiths at Mad Dwarf Workshop - great job there, guys!

One last thing to mention, and that's Loki's character development. In many ways, Loki's story acts as a parallel to his brother's - while Thor starts out with little sense and a huge ego that gets somewhat chopped down to size over the course of the movie - 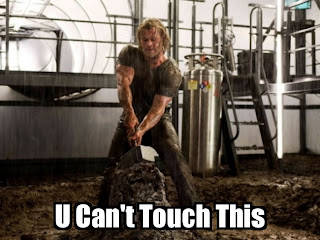 With apologies to Marvel and M. C. Hammer.


- Loki becomes less sensible and more ego-driven as events spiral out of his tenuous control. Even so, right up through the end he remains a sympathetic antagonist - even now, it's not so hard to imagine that he and Thor could end up reconciled. I expect they won't, not permanently, but if Thor really takes off as a franchise it would be an unexpected and inspiring direction to take it.