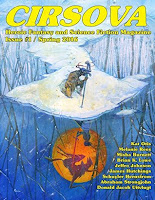 Earlier this week the nominees for the 2017 Hugo Awards were announced, and while for the most part I can't really gin up much of a reaction I was quite gratified to see that Cirsova Heroic Fantasy and Science Fiction Magazine has won a nomination (which, these days, is almost more prestigious than actually winning) for Best Semiprozine. Now, I've been an eager reader of Cirsova since it premiered on Kickstarter in January 2016, but have inexplicably failed to talk about it here.

Time to fix that.

Inspired by what he called "older, weirder, and pulpier" fiction and seeking to provide an outlet for the same, editor P. Alexander really hit the ground running with Issue #1. Basically every story, from the alternate-history Spanish-Armada-with magic story by Kat Otis to the pure undiluted sword-and-planet tale by Abraham Strongjohn to the first part of James Hutchings's poetic adaption of Edgar Rice Burrough's "Princess of Mars" has something to recommend it. My personal favorite, I must say, is "A Hill of Stars" by Misha Burnett, which has a great take on the Howardian pre-historic civilization idea, mainly by using the Old Ones from H. P. Lovecraft's "At the Mountains of Madness" as the just-fallen empire which the dinosaur-riding human barbarians are in the process of looting. The main character is a former slave of the Old Ones who uses their knowledge to win life, love, and liberty in a terrific example of what the "Pulp Revolution" literary movement is about. 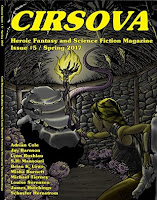 And I'm not the only one who thinks so - shortly after the issue was published, Misha Burnett opened up the "Eldritch Earth" setting for other writers to use, and the just-released Issue #5 of Cirsova is reported to have several of the resulting stories. Alas, while I have downloaded the issue I haven't yet found time to read it, but I'm definitely looking forward to it.

Certainly the middle three issues have consistently met the expectations set by #1. While there's certainly an emphasis on science-fantasy stories of one sort or another, there's really something for everyone here. Just to give a quick idea, some of the other stories that impressed me the most included -

And that's just a few of the dozens of stories that I found the most memorable - I haven't even mentioned the essays by Jeffro Johnson and others analyzing the older pulp stories, or the fact that Issue #3 was designated the "Pirate Issue", or hardly anything other than the surface of this fine magazine. And to top it all off, all the content from the first two issues is available free at the links above!

Even if, like me, you're a fan of science fiction or fantasy but don't consider yourself a short fiction reader, if anything would change your mind, Cirsova would. I really don't know of anything else (except maybe Skelos) like it. 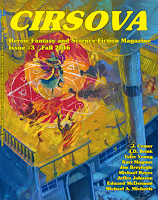 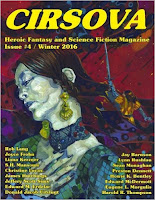 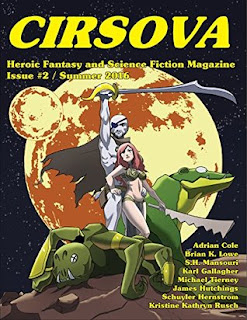 Posted by T. Everett at 8:36 AM No comments: Links to this post