Hmph - two posts in and already there's schedule slippage. Nothing to do but carry on, I suppose.

Not surprisingly, there are quite a few different sets of books that could qualify for today's first category. The Chronicles of Narnia would be an obvious answer, if I weren't saving them for an upcoming day; as would the Dirk Pitt novels by Clive Cussler, and Terry Pratchet's Discworld series, both also favorites of mine. I ended up basing my decision on a number of factors - what series (I asked myself) am I most likely to recommend for someone looking for something new to read? What series do I buy new installments to immediately upon release? Most relevantly, what series jumped immediately to mind when I read the question? When I thought about it that way, one answer came readily to mind - The Dresden Files, by Jim Butcher. 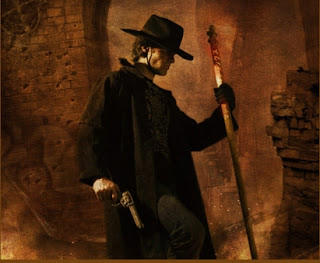 Another reason to like the series is the great, if not always accurate, cover art by Chris McGrath.
Although it took a few installments to really settle in, the books telling the story of modern-day wizard Harry Dresden have been consistently high-quality in storytelling and world- and character building. Although we only learn about it in bits and pieces, there definitely seems to be a consistent backstory to the Files, and lots of things going on the background that Harry (our first-person narrator) doesn't seem to be aware of. It takes a skillful writer to pull this off properly, and so far I for one haven't been disappointed.

As the series has progressed, the characterization has also only improved, not that it was ever bad to begin with. This not only applies to the main characters, Harry and Karrin Murphy and the rest of the cast that appears in pretty much every book, but to just about everyone that appears - even characters who start out as one-note obstacles to Harry (I'm thinking of Morgan specifically here, who starts out in a fairly stereotypical unreasonable-lawman mode, but by the later books is considerably more sympathetic. And then - but I won't go into that). The books also deserve special mention for Michael Carpenter, easily one of the best Christian characters to be found in a secular novel of recent years.

Most importantly, The Dresden Files is fun to read, figuring out the whodunnit-and-why plots along with Harry, piecing together the backstory as Jim lets it out, and making guesses and deductions about where the series will ultimitely end up.

Now that the question of my favorite series is settled, it's time to narrow down the field to my favorite Dresden File, as it were - after all, there's only, what, twelve novels, as many short stories, and a comic book (There's also an RPG and a TV series, but those aren't in the same continuity) to pick from?

Maybe I could talk about Fool Moon, the early novel that lays out the Dresden-verse rules for werewolves; the short story "Even Hand", with its game-changing new villains and unique POV; or even the most recent novel, Changes, which lives up to its name in pretty much every respect.

I think my favorite installment in the series thus far, though, is still the seventh novel, Dead Beat. There are many reasons for this decision - the skillful way in which Jim Butcher played out the consequences from Death Masks, right up until the moment Harry puts all the pieces together; the development of Waldo Butters into a fully-rounded character, and for that matter Harry's character development both in terms of his relationship with his fellow wizards and his magical capabilities - and then there's the finale: 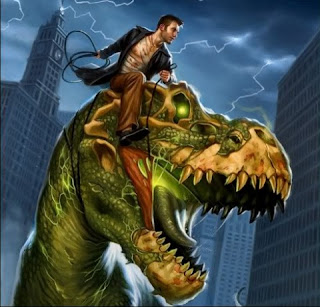 The omnibus art by Dan Dos Santos isn't bad, either.
Yes, that's Harry riding an undead Tyrannosaurus Rex. And not just any T. Rex, either, but the most famous one yet discovered. Little things like that are one of the things that make The Dresden Files such fun to read.
Posted by T. Everett at 11:56 AM

Just sayin’. Surely there’s a book that makes you happy! And if there isn’t…surely you can skip around to something easier to discuss!