A Tale of Two Conans

When Conan of Cimmeria, Robert E. Howard's iconic sword-and-sorcery hero, was first being adapted to American comic books in the 1970s, the publisher - Marvel Comics, home of Spider-man, the Avengers, and a bright destiny in the movie industry - gave him a starring role in two separate magazines. The first, Conan the Barbarian, was the mainstream, all-ages title while Savage Sword of Conan was meant to be a more adult, sophisticated title. Nearly fifty years later, the Wheel of Copyright has once again brought Conan to Marvel, and while they seem to have a fairly aggressive schedule planned, the central focus is again those two titles. 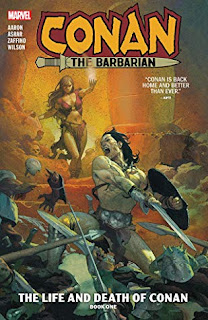 Conan the Barbarian: The Life and Death of Conan Book One is the first trade collection of the former, although its family-friendliness seems suspect when practically the first time we see Conan he's in a fighting pit in the Maul decapitating his two opponents. Readers familiar with Conan may remember the Maul as being a district in the city The Tower of the Elephant took place in, and indeed the stories that make up this collection have something of a "Conan's Greatest Hits" feel to them. The stories that follow, although there's a continuing story-line with an undead witch and her creepy child minions, jump around to some of the most well-known episodes of Conan's life - one takes place immediately following Beyond the Black River, one while Conan is a pirate, another while he's king, and so on. While the stories are mostly well done, a couple of places (such as the appearance of a sharktopus) get a bit campy - the idea of King Conan and his pet lion becoming a masked vigilante in the Aquilonian capital was so ridiculous it had to have come from corporate meddling. There were some nice shout-outs to the greater Conan continuity, although this was matched by at least one timeline flub (the chapter that takes place after Beyond the Black River ends with Conan going back across the river to civilization, while in the original stories he fights his way through the wilderness to the coast and gets caught up in the plot of The Black Stranger). I also noticed a general trend, common in Conan pastiche, of giving Conan's life an air of Destiny, with everything bending towards his becoming a king. This was something that Howard managed to avoid, even though Conan was already king in his first appearance, and all the earlier stories were technically prequels. 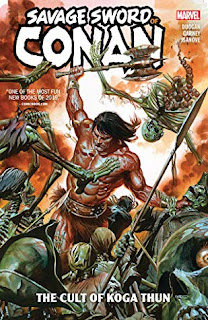 Far less epic in scope, Savage Sword of Conan: The Cult of Koga Thun manages to seem much more complete as a story, although this is probably an unfair comparison to make with something explicitly labeled Book One. Following the well-trodden formula of Conan escaping from dire circumstances that would kill a lessor man, getting mixed up in a struggle over a fabulous treasure, and escaping into the night as everything collapses into chaos; it still manages to insert a few interesting wrinkles, such as the nature of the treasure and the involvement of the mysterious serpent-men, who are usually a Kull thing but always fun to see show up (indeed, of the various scheduled appearance of Conan tying him to the greater Marvel universe, the one I'm most interested in has the intriguing title of Conan: Serpent War). The use of magic in the story seemed heavy compared to the original Howard, what with the undead hordes and the poison that turns humans into serpent-men and the map that imprints itself onto Conan's mind, but the Cimmerian was at least properly suspicious of all of it.

In the end, although they were trying to do quite different things with the pulp-era character, both of these comics presented reasonably enjoyable takes on Conan the Barbarian. It goes without saying that the prose originals by Robert E. Howard were the best, but  once you've read all those, these make as good a continuation as you're likely to find. I did hear that the original single issues that these editions collect had a prose Conan serial in them too, and was a bit disappointed that they weren't also collected. Hopefully they'll turn up in a collection of their own at some point.
Posted by T. Everett at 8:13 AM